The “Belly Button” of the cheese

If you’ve ever seen a whole wheel of the iconic US cheese, Vella Dry Jack you might have noticed that the cheese is irregularly shaped and has an indentation on the top that the Vella family fondly dubbed “the belly button”. This cheese, along with several other aged cheeses, are pressed while wrapped in cheese cloth- instead of rigid forms and molds. When I first started making cheese, about 10 years ago, I tried pressing a few small wheels of jack type cheese in this fashion. But I couldn’t figure out how to tie a knot that didn’t make a huge divet (instead of a small belly button) in the wheel.

While doing research and making many different cheese types for my most recent book “Mastering Artisan Cheesemaking” I learned to tie a “Stilton knot”- which is traditionally used to hold Stilton blue cheese curd during draining. The knot enables the cheesemaker to gather and tighten the curd evenly, without tying a bulky knot.  When making a Stilton style cheese, the bundles are formed while the curd is still soft, and sit in the vat while whey drains around them. When making a jack type cheese, however, the bundle is formed after the curd is fully drained and salted. You can use this technique for other types of cheeses as well, even those that are to be brine salted.

To form a Stilton knot, place the curd into the center of a finely woven cheesecloth. Then

After gathering three corners, wrap the 4th around the others, spirally lower, until the knot is tight against the ball of curd

lift and gather three of the corners of the cloth and hold them in one hand. With your other hand take the fourth corner and wrap it around the other three- low and snug to the curd.Make each wrap progressively closer to the curd, this not only tightens the bundle, but also keeps the knot from coming loose. Voila!

I tried it out on one of our “regular” cheeses that we call “Takelma”, a washed curd variety that we usually make in 8 pound wheels. This singular wheel is 24 pounds. After forming the drained curd into a Stilton bundle, I placed a cutting board on top (using short forms at each corner to keep the board from tipping) and then added weight as needed to close the rind and paste. 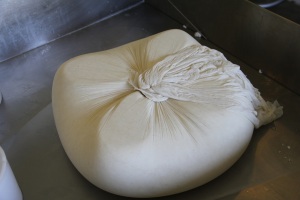 24 pound wheel after pressing with a food grade board

The wheel reached the correct pH for pressing (in this case 5.2) within a few hours. It was nice to not have to turn the wheel for this type of pressing, and I could easily see that the curd was knitting by looking at it through the cloth (without untying the knot).  After the correct pH was reached, I had a bit of a problem- the wheel was far to large to fit into our usual brine tanks!  Hmm, I thought, and looked around the creamery. There was the vat sitting unused. So I poured in about 3 gallons of fully saturated brine and placed the big cheese down into the solution.  I left the wheel inside it’s bundle and then lifted it into the brine and then unwrapped it- I was concerned that it would crack or break if lifted after unwrapping.

We’ll see how this bigger version ages- as it will be different than it’s smaller derivation. I will core sample it at about 3-4 months and let you all know.

6 thoughts on “Pressing Cheese without a Form”